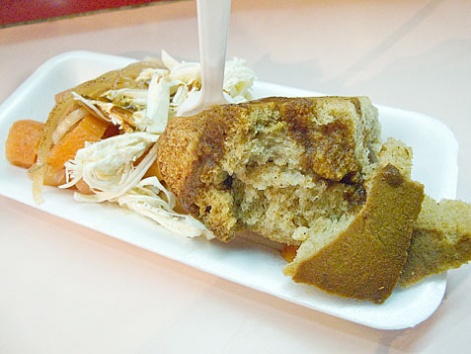 What: Biscotti-hard, dry bread (pan duro) is served with a spicy-sour mix of pickled vegetables—sliced onions, chopped carrots, potato—and drenched in vinegar and spices. Stringy quesillo cheese is often on the plate, too. Piedrazo is not too far off from the idea of croutons in a heavily dressed salad, but it involves a bigger hunk of bread. The name itself means "little stones," due, we imagine, to the pieces of hard bread. Given its description, we admittedly weren’t all that excited to try this one, but were happily surprised: It’s mouth-puckering, yes, but super flavorful and delicious.

Piedrazo is most commonly served in July during a traditional Oaxacan celebration called Guelaguetza, but you can find it in torta shops, ice cream shops, and at street vendors around Oaxaca during other months too.

Where: We had great piedrazo in Mercado Benito Juárez (Miguel Cabrera at Las Casas, map) at Tortas “Ali” (no. 153), a small but popular  counter.

Order: Piedrazo con todo (10p), which means you’ll get the bread, veggies, and cheese. As the name suggests, this place also deals in tortas.

Alternatively: There’s an excellent street cart on the corner of Alcalá and Matamoros (map) every day from 10am-10pm that sells piedrazo and all things pickled, preserved, and sweet: syrupy-sweet red plantains, alcohol-steeped figs, mangos in chile, and arroz con leche y garbanzo, to name a few.