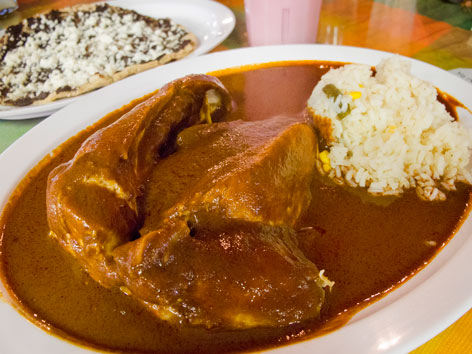 What: Thanks to the city’s huge Mexican population, L.A. doesn’t just have great Mexican food: It has great Oaxacan, Pueblan, and Yucatecan food; authentic Jalisco-style barbacoa; plentiful masa-based antojitos à la Mexico City; and delicious Baja-style fish tacos—to name a few—from restaurants that pay special tribute to the gastronomy of a particular region in Mexico, rather than try to do a little bit of everything (or revert to too much cheese and oil, the American way). The result in L.A. is a more accurate, nuanced representation of “real” Mexican food in all its wondrous glory.

Where: There are many options from a good handful of Mexican states, but since we have a soft spot for Oaxaca, we chose Guelaguetza (two locations including 3014 W. Olympic Blvd., map), a locally trusted purveyor of auténtica comida Oaxaqueña. Instead of chips and salsa, here you get delicious mole coloradito for a dipping sauce. And as a bonus, the restaurant recently opened The Mezcaleria, an in-house bar that opens after 5pm showcasing about 50 curated mezcals.

Good to know: Do not—repeat, do not—leave Guelaguetza without picking up some mole paste to go. It keeps well in the refrigerator for a few months, and all you have to do is add water or stock.