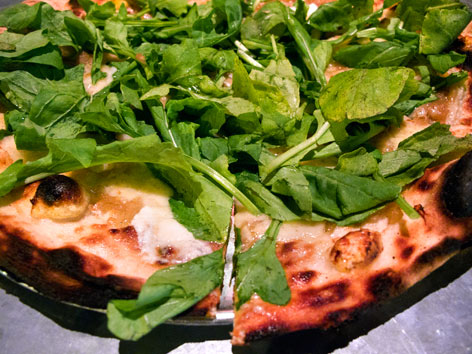 What: Some will argue it’s not a “real” type of pizza, but California pizza is simply this: a thin-crust pie with fresh, creative, California-esque toppings. Its defining characteristic is what’s on top, as that’s where chefs have been free to experiment and refine the pizza pie into something healthier and more gourmet—think artichoke hearts, avocado, and goat cheese rather than pepperoni and meatballs. This concept became popular in the early 1980s thanks to a handful of restaurants—Spago, then in Hollywood; Chez Panisse in Berkeley; and, later, California Pizza Kitchen, which brought the trend national—and the chefs behind them: Wolfgang Puck, Ed LaDou (Puck hired LaDou as pizzaiola at Spago; LaDou also helped develop the menu for CPK), and Alice Waters. The fact that this pizza exists and hails from California makes sense given the state’s bounty of fresh produce, affinity for culinary innovation, and, well, general enthusiasm for vegetable matter (see also: organic vegan & vegetarian food).

Where: True, there are plenty of California Pizza Kitchens in L.A.—and around the world—these days, but despite it having originated in Beverly Hills, we say skip the chain and go to Gjelina (1429 Abbot Kinney Blvd., map) in Venice, a super trendy yet moderately priced spot that lives up to its hype—and, though it doesn’t expressly call it so, includes some excellent California-style pizzas on its earthy, seasonal, small-plates-dominated menu. The chef, Travis Lett, sources as much as possible from local farmers and suppliers.

When: Daily, 8am-midnight. Definitely reserve if you can.

Note: There's now a reservation-free option, Gjelina Takeaway, or GTA, next door to the main restaurant.

Order: Who needs a salad when you can have an incredibly tasty thin-crust pizza topped with Gruyère, fromage blanc, caramelized onion, and a pile of fresh arugula? Though this pie is pictured ($16) and was wonderful—the sweet onions perfectly balancing the assertive Gruyère—it is only one of about 17 options, which change around a bit season to season. We also loved the meaty (yet vegetarian) mixed mushroom pizza ($17), a cheeseless pie with rosemary and garlic oil; but you might try the salted anchovy pie ($17) or perhaps the much-lauded lamb sausage pizza, with confit tomato, rapini, pecorino, and asiago ($18). Also pay special attention to Gjelina’s beautifully, simply prepared vegetable small plates ($12), like the spicy roasted cauliflower dish, charred Brussels sprouts, and sweet corn with crème fraiche.

Alternatively: Though Chef LaDou—the man widely credited with “inventing” California-style pizza and bringing it to the masses via his work at Spago and CPK—passed away in 2007, you can visit his artisanal pizzeria, Caioti Pizza Café (4346 Tujunga Ave., map) in Studio City, where the LaDou family still runs things. Among the famous “New World” creations remaining are LaDou’s signature barbecue chicken pizza, with red onion, cilantro, mozzarella, and smoked Gouda; the Rockefeller pie, with oysters, shrimp, spinach, Gruyère, roast peppers, bread crumbs, and mozzarella; and the lamb sausage pizza, with eggplant, garlic, feta, mozzarella, and kalamata olives. And, of course, you can always go to Puck’s Spago (176 N. Canon Dr., map), the Michelin-starred flagship of which—chic, pricey, celeb-friendly—is in Beverly Hills. The pizza menu is small, seasonal, and offered only at lunch nowadays, but you can still get the signature house-smoked salmon pizza, a delicate, crisp pie with dill cream and shaved sweet onions.