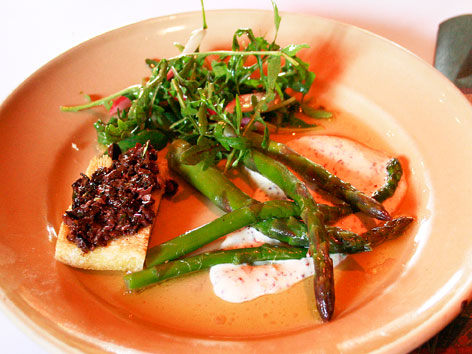 What: One of the best things about living and eating in California is having access to gorgeous, fresh local produce, year-round. In addition to enviable farmers markets, the Bay Area has a community of chefs who are deeply dedicated to showcasing the bounty of the land around San Francisco, and championing the farmers who put time and effort into their craft. This commitment to local produce, meats, and food products has cultivated a distinct attitude about food that’s now deeply ingrained in San Francisco foodie culture: Diners want to know where their food comes from, and to feel confident that it’s produced in sustainable, humane ways. At this point, many San Francisco restaurants tout sustainable and local products—it’s not uncommon for dish descriptions to include the names of farms, or for restaurant websites to list the farmers and producers they work with. But none of this would have happened if it weren’t for Alice Waters, the mother of the local food movement in California and, arguably, the entire country.

Waters’ restaurant Chez Panisse opened in Berkeley in 1971, and began serving a brand of food that, at the time, was foreign to most diners. She prepared fresh produce in a way that let her ingredients shine; she preached beliefs about sustainable, small-scale agriculture; and soon, she had started a revolution in the way that we eat and think about food. The so-called California cuisine that was born of this movement is often associated with hyperaware, activist-based eating, and has even spurred debates about the merits of simple California preparations versus technique-driven modernist cuisine (see: the fig on a plate controversy). But regardless of techniques used (or not used), Bay Area chefs value local, fresh ingredients on the regular.

Where: Forty-plus years and one fire later, Chez Panisse (1517 Shattuck Ave., betw. Cedar & Vine Sts., map) is still going strong, with a laid-back café packed by day and a pilgrimage-worthy prix-fixe-dinner-only restaurant downstairs. It feels a little like visiting someone’s house for a dinner party…an expertly prepared, sort-of life-changing dinner party, that is.

Order: Whatever grabs your attention on the daily-changing menu—you’ll find serious care and attention given to all the dishes that wind up on it. Pictured is an incredible spring starter at the café featuring “Bob’s asparagus” ($10), a creamy mustard dressing, and buttery black-olive toast. (Bob is Bob Cannard of Green String Farm in Petaluma; the farm describes itself as “beyond sustainable” and has been providing produce to Chez Panisse for more than 30 years.) The fat asparagus spears were tender and delicious, fresh enough to be served just barely cooked, but the Chez Panisse touch managed to enhance its natural buttery earthiness with complementary flavors (that mustard dressing in particular was excellent). Unsurprisingly, the staff here is highly knowledgeable about the food and the various restaurant-farm relationships, so feel free to quiz them (as well as ask for recommendations).

Alternatively: “Local” and “sustainable” have become buzzwords that nearly all San Francisco restaurants advertise, but certain spots continue to do it better than most. Local Mission Eatery (3111 24th St., betw. Shotwell & Folsom Sts., map) says it all in its name: The restaurant sources all of its produce, meat, dairy, and even products like olive oil from the Bay Area. It has since branched out to open Local’s Corner (2500 Bryant St., at 23rd St., map), a seafood restaurant that similarly sources its fish from the San Francisco Bay and nearby Pacific Ocean, and the Local Mission Market (2670 Harrison St., betw. 22nd & 23rd Sts., map), which sells only local products or goods that have been made on-site. Nopa (560 Divisadero St., at Hayes St., map) is another restaurant that champions the best area farms and producers, working closely with farmers to guide its menus and actively writing about its producers on its blog, Nopalize. Established in 1922, the Ferry Plaza Farmers Market (1 Ferry Building Marketplace, at Embarcadero, map), held on Tuesdays, Thursdays, and Saturdays year-round,  is an incredible place to see a wide variety of Bay Area farmers and producers all at once—prepare to be blown away by the gorgeous offerings, and definitely plan on picking up some goodies for a snack, meal, or souvenir.