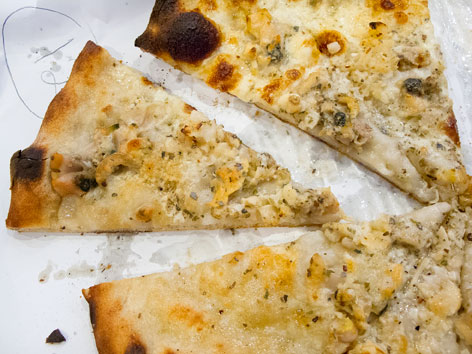 A New Haven invention, the beloved clam pie employs chopped clams—locally sourced and freshly shucked at the best places—as a pizza topping, typically alongside fresh garlic, grated Romano cheese, olive oil, and oregano. It came about thanks to one Frank Pepe, he of the namesake New Haven pizza institution.

As Francis Roselli, one of Frank’s grandsons, told us, Frank was illiterate when he came to America from southern Italy, but he could bake (and, thankfully, his wife could read and write). After WWI he began making pizzas, selling them off a delivery cart and then inside his bakery. He made a tomato pie with or without anchovies, but soon after was inspired to sell local clams on the half shell. It wasn’t long before he decided to put the clams on the pizza, and a New Haven legend was born.

The white clam pies of today are a delightful mix of sea saltiness and earthy nuttiness, happily married on a pliant, chewy New Haven thin crust. You gotta try one.

Where: Thanks to Frank’s many grandchildren, Frank Pepe Pizzeria Napoletana (157 Wooster St., map) is still churning out its signature white clam pizzas (among many other of the apizzas that originated here) to legions of local and visiting fans. You can also find the pie at its across-the-parking-lot annex, The Spot (163 Wooster St.)—Pepe’s original original location, incidentally (the main pizzeria moved to No. 157 in 1937).

Order: A white clam pizza ($12.75-$26.25, depending on size), which is fresh littleneck clams (chopped), fresh garlic, grated Romano, oregano, and olive oil, atop Pepe’s wonderfully thin, chewy, char-marked crust, cooked at high temperatures in an ancient coal-fed brick oven. The clams are tender and pleasantly briny, a perfect contrast to the soft garlic and lightly strewn cheese. Some swear by adding bacon to the white clam pie, which sounds like a brilliant idea. If you’re not going to any other area pizzerias, get a tomato pie too. And some local birch beer.

Alternatively: Another good bet for a clam pie is Zuppardi’s Apizza (179 Union Ave., map) in nearby West Haven, as it’s one of the few other pizzerias that uses fresh, rather than canned, clams—in fact, they shuck to order here. Zupp’s, which was established in 1934 and remains family-owned, makes a mean homemade-sausage pie, too. For more of a nightlife scene (not to mention great house brews), head to The BruRoom at Bar (254 Crown St., map), which also uses fresh littleneck clams on its pizzas—as well as more daring toppings, like its infamous mashed potato and bacon combo (we like pepperoni, hot cherry peppers, and mushroom on a red pie with mozzarella).