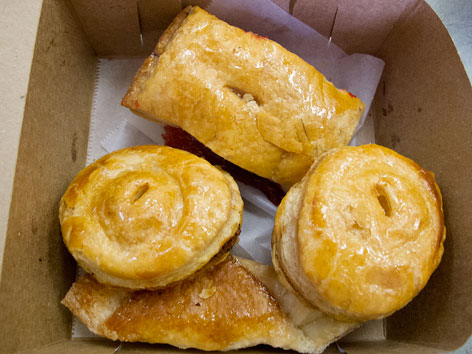 What: Cuban pasteles, also called pastelitos, are flaky pastries filled with fruit, cheese, or meat—popular items at Latin bakeries around Miami. (Don’t confuse these with the more tamal-like pasteles produced by other Latin American countries, such as Puerto Rico, which you can also likely find in Miami.) Guayaba, or guava, is perhaps the most common filling, but you’re bound to want to try several varieties once you glimpse these babies behind a glass counter, where they’re typically kept warm. There’s no happier start to a day in Miami than with a box of pasteles and a café Cubano.

Where: Our box of goodies comes from Pinocho Bakery (5236 West Flagler St., map), a family-owned pastel hot spot since 1981 that makes its pasteles in-house.

Order: Pictured are the pasteles de guayaba (guava; square shape), queso (cream cheese; log shape), and carne (meat; round), 75 cents apiece. During our visit the bakery was out of the one we really wanted, a mix of guava and cheese, but these were all delicious in their own rights. (And it is a good idea to try all three, because they’re very different—you know, for the sake of cultural research.) The guava was flaky and sweet with fruit; the creamy queso a bit crunchier, sprinkled with sugar; and the carne a toothsome mix of light, flaky outside and savory-spiced beef inside.