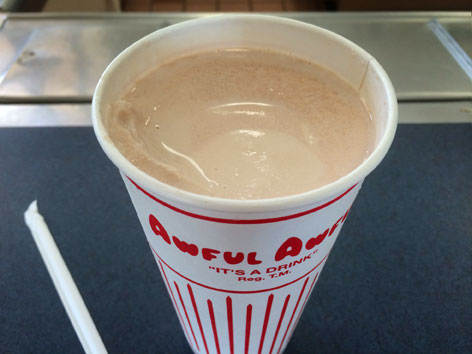 Another of quirky Rhode Island’s favorite drinks, the Awful Awful is a sinful concoction of whole milk, flavored syrup, and “secret” frozen ice milk, the latter of which differentiates it from something like a frappe (or a cabinet, as it’s known around here). Ice milk is supposedly better for you than ice cream, but don’t be mistaken: This is one heck of a rich, filling drink. Its name, by the way, comes from “Awful Big, Awful Good.” If you love all things related to the milkshake, an Awful Awful in Rhode Island is a must.

Good to know: The Awful Awful wasn’t always an only-in-Rhode-Island drink: It began life in the 1940s at Bond’s Ice Cream of New Jersey, where it was invented and first trademarked. Bond’s then licensed the drink to both Newport Creamery and Friendly’s (before it was Friendly’s the large chain—at the time it was just Friendly, a restaurant or two in Massachusetts). When Friendly’s expanded across the East Coast, it had to change the name, and the Fribble was born. When Bond’s subsequently went into bankruptcy in the 1970s, Newport Creamery bought the Awful Awful name for a mere $1,000. [source: Boston Globe]

Where: The Awful Awful is a trademark of Newport Creamery (multiple locations including 673 Smith St., Providence, map), a chain of restaurants in Rhode Island (and one in southern Massachusetts), with headquarters in Middletown, RI, so you have to go there for your fix. Interestingly, given its history, the restaurant we visited felt to us just like a Friendly’s: casual, spacious, and family-friendly, with lots of comfy booths.

Order: Awful Awfuls come in a few sizes and many flavors; pictured is a regular-size chocolate ($4.89), our go-to basic flavor. If we’d been feeling more adventurous, perhaps we would have gone for mocha or chocolate mint; if we’d been “Outrageous,” a Strawberry Banana Chip or Cappuccino Crunch might have been called for. There’s a junior size, too, and a reduced-fat version, which uses skim milk.

We were quite happy with our order though: The Awful Awful is cold, silky, and richly chocolate-sweet—not quite as thick as what we’d call a milkshake, but filling nonetheless. Very satisfying on a hot day when you’re feeling like a (calorie) splurge.

Alternatively: No place but Newport Creamery carries this Rhode Island treat! Who knows and loves this drink?