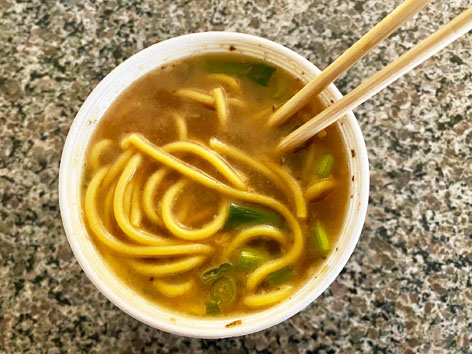 It wasn’t until our third trip to New Orleans that the local noodle soup called ya-ka-mein crossed our path. A popular festival food and hangover cure that combines noodles with green onion, boiled egg, and your meat of choice, ya-ka-mein has a soy sauce-based broth laced with Creole spices like onion powder, garlic powder, oregano, paprika, cayenne, thyme, and black pepper. The noodles might be lo mein, or more likely spaghetti.

As a local NOLA dish, ya-ka-mein has murky origins, but one thing is clear: It reflects some commingling between Asian and African American culinary traditions.

According to Eater, a popular story is that Black soldiers brought a version of this dish home from the Korean War, and in NOLA their wives and moms adapted the dish using their own spices and leftover meats. Another story credits Chinese immigrants, brought to the area to work on the railroads and sugar plantations, for introducing the dish to New Orleans (and its African American inhabitants). Still another claims ya-ka-mein was an improvised noodle dish created by Chinese American restaurants for local Black patrons, tailored to their taste—this particular explanation would account for the fact that some version of this dish has turned up on Chinese restaurant menus across North America for over a century.

A salty, carby, restorative bowl of soup, ya-ka-mein grew to be a staple meal in many African American homes, the kind of recipe that generally wasn’t written down. It is sometimes called Old Sober for its day-after abilities. We can see that, and we can also see why we might have missed it on earlier visits: This soup feels distinctly local in a way that New Orleans’ other, more famous dishes no longer are as they’ve been exported around the country, and beyond. Here’s where to try some ya-ka-mein in NOLA.

Good to know: This dish is spelled all sorts of ways, with or without the hyphens; yaka meat; yat mein; yet ca mein. Phonetically it is similar, according to Wikipedia, to the Cantonese pronunciation of “one order of [house] noodles.”

Where: Ya-ka-mein in New Orleans tends to be found at corner groceries, takeout joints, festivals, and roadside at Second Lines (neighborhood parades). Similar to mumbo sauce and fried chicken in Washington, DC, you may also find it at Chinese restaurants that cater to Black people. It caught our eye advertised outside a Cajun Seafood (multiple locations including in Treme, 1479 N. Claiborne Ave., map) near our house rental, so that’s where ours is from. Cajun Seafood sells all manner of frozen and cooked seafood, plus prepared foods like gumbo, po’boys, seafood platters, and more. The longest line was for the bags of boiled seafood—spicy Louisiana crawfish was just $5.49 a pound during our visit. (Mental note to return for that next time!)

Order: This ya-ka-mein, pictured in its typical Styrofoam takeout container, costs $8.99 for chicken, beef, or shrimp; or $10.99 for a combination of those. We went with chicken, and it was salty—not overly so—and comforting, studded with the typical green onion and egg. We did not detect any real spice. (Next time we’d try the beef, which seems more traditional and likely yields a richer broth.) This soup is eaten with a fork just as much as it is with chopsticks, by the way!

Alternatively: Something else we missed about NOLA was Ms. Linda Green, aka the Ya-ka-mein Lady. Post Hurricane Katrina, she single-handedly brought this dish into the national spotlight when she began serving her family’s recipe at Jazz Fest. Since then, she’s been featured on more than one national TV show, including Anthony Bourdain’s No Reservations. Chef Green offers the soup with beef, shrimp, duck, or alligator, and has a vegetarian version too. Next time we will seek her ya-ka-mein out! (She’s primarily a caterer, so look for her food at festivals, events, and pop-ups—check her website and Facebook page for current locations.)

Eater also has a list of where to find good ya-ka-mein around New Orleans, including Bywater Bakery (3624 Dauphine St., map) and Red Rooster (2801 1/2 Washington Ave., map), the latter a snowball stand with “yet-ca-mein” on the menu.