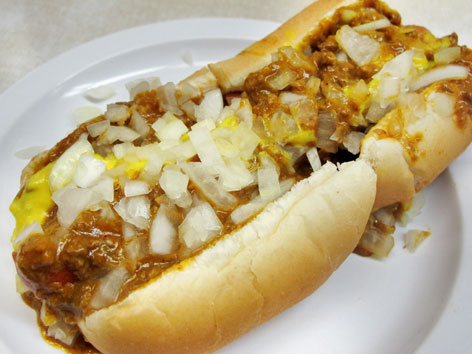 What: The signature hot dog of Detroit, the Coney Island dog is a grilled wiener (always from Michigan!) covered with a runny meat chili (beanless and usually made with beef hearts), chopped raw onions, and yellow mustard, wrapped in a steamed bun. It has nothing really to do with Coney Island, NY, other than being a shout-out to the birthplace of hot dogs in America (via German immigrants)—which was probably a marketing ploy. (Interestingly, in places like Quebec and northern New York, this kind of chili dog is sometimes called a “Michigan hot dog.”) The first Coney dog is generally attributed to a restaurant in Jackson, MI, in 1914, where the “Coney sauce” was invented, but two still-existing institutions in downtown Detroit weren’t far behind.

Where: Sitting side by side downtown, Lafayette Coney Island (313-964-8198; 118 W. Lafayette Blvd., map) and American Coney Island (114 W. Lafayette Blvd., map) are where you go to get your Coney dog fix…preferably after a long night of drinking. Most locals have a strong opinion as to which is better. Without getting involved in that quagmire, we chose to feature Lafayette because it’s much divier than the remodeled American, which positively glitters in comparison despite being the older of the two (est. 1917). Lafayette, with its cramped quarters, Formica tables, and sticky menus, feels more like the real-deal down-and-dirty Detroit experience.

When: Lafayette is open Sun-Thurs, 9am-3am (sometimes 1am, depending on business); Fri-Sat, 9am-4am. American is open 24 hours a day.

Order: At Lafayette, a Coney Island dog with everything ($2.62), which means beef chili, chopped raw onion, and yellow mustard. The slightly snappy wiener—a natural-casing pork-and-beef mix from Dearborn Sausage Company—and crunchy onions add some needed texture to the soupy, meaty chili, but the yellow mustard seems the key ingredient, enlivening the dog with some tang. Expect a mess, and to want to mop up what falls off with the bun that’s left when you’re done. Chili cheese fries are a popular accompaniment, or a bag of local Better Made potato chips. Also big here are the mysterious “loose hamburgers”—loose ground beef in a hot dog bun, generally topped with the usual Coney dog ingredients.

Alternatively: Aside from American next door, there are countless—probably hundreds—of generic “Coney Island restaurants” all around the Metro Detroit area. They used to be mostly Greek-owned, though today there are likely a lot of Albanians and Macedonians in the mix. Still, they’re akin to Greek diners, with lengthy menus and cheap prices. The most popular items at these restaurants are all-day breakfasts, gyros, and, naturally, Coney Island dogs. You might try Zeff’s Coney Island Restaurant in Eastern Market (313-259-4705; 2469 Russell St., map); or, from the same Greek family that runs American and Lafayette, the Kerby’s Koney Island franchise (multiple locations including 16531 Ford Rd., Dearborn, map).