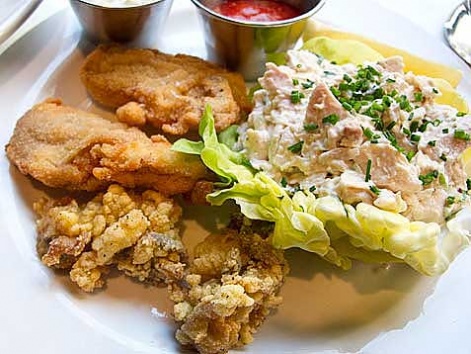 What: The odd pairing of fried oysters and chicken salad is a classic Philadelphia lunch tradition with roots in the city’s 19th-century taverns, likely owing specifically to the African-American chefs in the city's private social clubs. Back then oysters were, of course, cheap and plentiful; pepper hash, an acidic stand-in for pricier lemon, was another common component on the plate, consisting of vinegary shredded cabbage and peppers. Fried oysters and chicken salad is most associated with Philly, but seems to have been popular in other parts of the East Coast too, including south New Jersey and Delaware. It’s not very common on menus today, but you can still find it in the heart of Center City.

Where: The renovated Oyster House (1516 Sansom St., map) is only the latest update of a string of family-owned seafood restaurants that date back to 1947 (the one that preceded this one was called the Sansom Street Oyster House, which in itself was a throwback to the oyster bars of yore). The menu revolves around (mostly) locally sourced oysters, as does the bright, open restaurant itself—the shuckers work right in the middle of it.

Order: The Southern-fried oysters and chicken salad ($15)—which are not mixed together, for the record. During our visit, we requested our oysters cooked two different ways: Southern fried, which entails smaller oysters fried in cornmeal, and traditional fried, which are plumper, softer oysters fried in cracker meal (this is the true old-school Philly way of frying oysters!). They are no longer explicitly offered both ways on the menu, but you can ask your server, if you are interested in the cracker-meal fry. The homemade chicken salad, incidentally, is excellent: flecked with chives, smooth and creamy, not too heavy on the mayo. Try some oysters on the half shell here too, with a Pennsylvania beer.

We haven't seen this dish anywhere else in Philly, but please note in the comments below if you have!