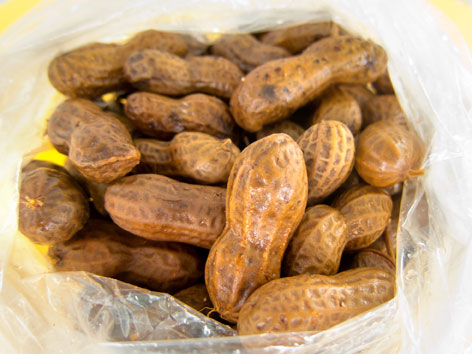 Boiling raw peanuts in salted water till they’re soft and creamy inside is common across much of the South, but there’s good reason to believe boiled peanuts have a special connection to the Lowcountry. According to the Charleston City Paper, peanuts—which traveled to the South on 18th-century slave ships from Africa, where the Portuguese had brought them from Brazil—were likely first served boiled here by Africans, who’d eaten the green, freshly picked legumes that way for centuries. By the turn of the 20th century, boiled peanuts had grown more fashionable at social gatherings, particularly in the small towns of the Carolinas during the summer peanut-harvest months, and from there their popularity spread southward, as far as Florida.

Fast-forward a few decades to 2006, when the state legislature of South Carolina declared boiled peanuts the state’s official snack food (beating out, say, benne wafers), and it’s safe to say this region has a thing for these legumes. They're a common sight at roadside stands, stores, in restaurants, and from individual vendors. We can see the appeal: Boiled peanuts are incredibly delicious. The simple act of boiling them—fresh and raw, with their shell, in salty water for an hour or so—transforms what many people know as a hard, crunchy, thirst-inducing nut into a creamy, moist savory treat.

Good to know: There are a couple of ways to eat these babies: You can peel and eat (though you will lose some of its juices); you can eat ’em whole, suck out the juice, and spit out the shell; or you can really eat them whole, shell and all.

Where: Already boiled-peanut converts, we were thrilled to find Mike’s Peanuts at the Saturday Marion Square farmers market (Meeting St. at Calhoun St., map). Mike’s uses only South Carolina peanuts and serves them straight outta the pot. He also sells them deep-fried, which wcouldn't try but imagine are tasty.

Order: Boiled peanuts are sold here for $4/pound, either regular or Cajun. Samples are offered, and while we liked the extra spice of the Cajuns, we had to go for the traditional variety. Super creamy, addictively salty, and served hot, that pound of nuts didn’t stand a chance for long.

Alternatively: For more than two decades, bow-tied local Anthony Wright, a.k.a. Tony the Peanut Man, has been a Charleston icon, best known for selling his wares in the stands at RiverDogs games, Charleston’s minor league baseball team. (Check his Facebook page for updates on where else to find him and his peanuts, which he offers boiled, fried, and roasted.) Out on Folly Road in the parking lot of Crosby Fish & Shrimp (2223 Folly Rd., map)—on the way to Bowens Island and its Frogmore stew—a truck called Fatboys Boiled Peanuts hangs out; its owner, Charles Lee, also has a Lowcountry restaurant, The Mason Jar by Fatboys (2487 Ashley River Rd., map), that likewise sells regular salted and Cajun boiled peanuts.

The Glass Onion (1219 Savannah Hwy, map) serves boiled peanuts as an appetizer on its menu, while other restaurants offer hot boiled peanuts for the table in lieu of bread, including Hyman's Seafood (215 Meeting St., map) downtown, and popular seafood joint The Wreck of the Richard & Charlene (106 Haddrell St., Mount Pleasant, map) in nearby Mount Pleasant.

Good to know: Want to try these shipped to your home? You can order boiled peanuts from The Lee Bros. Boiled Peanuts Catalogue—fresh (in five-pound increments), canned, or with a boil-your-own kit.