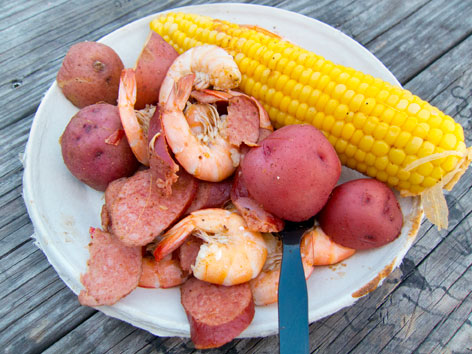 What: It looks like summer on a plate, but this local one-pot dish, a seasoned mix of unpeeled shrimp, corn, potatoes, and smoked sausage, goes by a few different names in South Carolina—Lowcountry boil, but also Frogmore or Beaufort stew, after the Frogmore community on St. Helena Island near Beaufort, where it’s said to have originated. Never mind that Frogmore itself is about a 90-minute drive south of Charleston—this dish is pure Lowcountry, found all along the coast and widely viewed as representative of the cuisine’s back-to-basics, local-ingredients simplicity. Like southern Louisiana’s crawfish boils, Frogmore stew is best eaten in someone’s backyard on a newspaper-covered table. But if you can’t make that happen in Charleston, a few good restaurants step up to the plate.

Where: We think the next best thing after a backyard boil must be eating the Frogmore stew at Bowens Island (843-795-2757; 1870 Bowens Island Rd., map), an informal indoor-outdoor restaurant at the tip of an island overlooking the beautiful wetlands of the Lowcountry. Founded in 1946, the restaurant is celebrated for its roasted, locally harvested oysters (winter season only, beginning around October) and terrific ambiance. It’s popular, so expect to wait on line a while to place your order (and then wait for your food—find some space on the back deck if you can). Fortunately, there’s great local beer to sip on in the meantime.

Order: The Frogmore stew ($15) is lovely here—simple, fresh, and flavorful, tasting of the sea, the land, and Old Bay seasoning. It’s a mess to eat, but the taste, coupled with sunset views over the picturesque river and marsh beyond, is more than worth it. We also found it a nice break from the area’s heavier dishes (don’t tell our favorite fried chicken joint). If you’re here during oyster season, do not miss the famous oyster roast; otherwise, try the delicious, lightly fried shrimp or oysters.

Alternatively: You can't beat the setting of Bowens Island, but if you can't make it out of downtown Charleston, try the Lowcountry shrimp boil at the festive, tourist-friendly Noisy Oyster (two locations including 24 N. Market St., map).