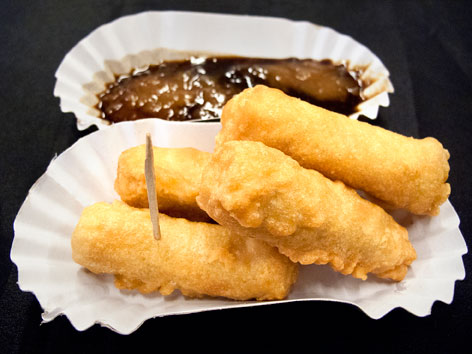 This is cheap, satisfying, readily available grub, and quintessential Cebuano street food. No surprise, then, that it’s a regular item in eateries or hawker-style stands near schools, offices, construction sites, markets, and shopping centers, as well as in Chinese restaurants.

Good to know: This snack is another ode to Cebu’s strong ties to China’s Fujian province, which is where many Chinese emigrants here hail from. In their language, ngohiong (or ngohiong-hun) simply refers to the five-spice powder that gives fried ngohiong its distinctive flavor. Additionally, while non-Cebuanos may call this dish lumpia (“loom-pya,” from the Chinese popiah), the Tagalog word for spring roll, it’s important to note that while ngohiong is a type of lumpia, not all lumpia are ngohiong. It’s a Cebu thing.

Where: We wanted ngohiong that hadn’t been mass-fried at 8am and steeped in grease by noon, a practice many ready-to-eat ngohiong eateries are guilty of. We found what we wanted at Small Eats Asian Street Food, a hawker-style stand at BTC, or Banilad Town Center (near the Banilad fly-over on Gov. M. Cuenco Ave.), that pops ngohiong into a deep fryer as it is ordered.

Order: One serving of ngohiong (Php 16) consists of two finger-length pieces—significantly smaller than what most food courts dish out—alongside the requisite sweet-sour-spicy sauce, which was more of a starchy slurry here (and tasted better than it looked). The ngohiong, lightly salted with an obvious five-spice-powder kick, had a nice crunch coming from both the battered rice-paper wrapper and the ubod wrapped inside. We quickly ordered a second serving, as these are rather addictive and only eventually filling—the kind of thing you can keep shoveling down until you suddenly realize you've had quite a few. For us, it proved a perfect filler in between main meals, though if any Cebuano were asked, they’d say it’s perfect sud-an (or viand; any savory dish) for lots of puso.

Alternatively: Those in the know swear by Domeng’s (Fairlane Subdivision, Guadalupe, map), a home-based ngohiong enterprise that tends to run out by 1pm. But to fulfill a ngohiong craving at any time of day (or night), we like Ngohiong Express (Juan Luna Ave., Mabolo, map), open 24 hours a day, seven days a week.