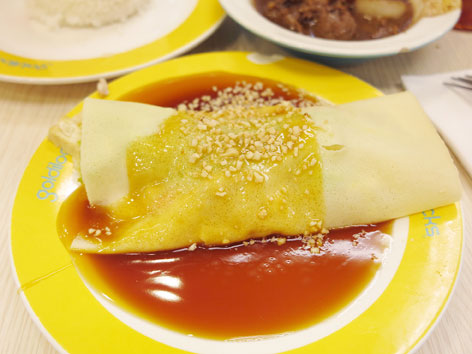 What: Lumpiang sariwa (“loom-pyang sah-ree-wa”) is a Manila-style fresh spring roll. It is roughly the size of a hand roll, an egg crepe-like wrapper containing slivers of stir-fried vegetables such as string beans, carrots, and sweet potatoes. Since this is Manila, a protein is likely to find its way in there, be it slivers of pork, chicken, small shrimp, or all of the above. A sweet soy-sauce-based, cornstarch-thickened sauce is drizzled on top, and a sprinkling of crushed peanuts usually completes the ensemble.

Called popiah (“poh-pya”) in Singapore, Malaysia, and Taiwan, lumpia is believed to have spread through Southeast Asia via immigrants from China’s Fujian province.The usual lumpia use a rice-flour-based wrapper that is tightly hand-rolled before being deep-fried. In Manila, variations abound: There is lumpiang togue (“toh-geh,” mung bean sprouts), lumpiang shanghai (smaller than hand rolls and filled with minced meat), lumpiang sariwa (“sa-ree-wa,” fresh, i.e., not deep-fried), lumpiang ubod (in which the key ingredient is coconut heart), and even lumpiang hubad (“hoo-bad,” meaning naked, with no wrapper). Lumpiang sariwa has a cousin in Cebu, simply called fresh lumpia or fresh Chinese lumpia.

Good to know: Some menus might list lumpiang sariwa as lumpiang ubod. Ubod alternately refers to bamboo shoots (also known as labong, “lah-bong”) and the “coconut heart”—the soft, edible core of the coconut tree’s trunk. Both are the texture of lightly blanched carrots, with the coconut heart variety offering a flavor similar to buko (“boo-koh”), the meat inside a young coconut fruit. You are, however, more likely to come across regular lumpiang sariwa, because coconut trees are not commercially cultivated for their ubod—it’s available only when the coconut tree is actually chopped down.

Order: One order of the all-veggie lumpia (Php 70) gets you a crepe (roughly six inches) lightly wrapped around sautéed vegetables. On top is a sweet-savory, golden, syrupy sauce, along with chopped peanuts and garlic. Inside, we detected julienned carrots, baguio beans (a type of short, green string beans), garlic, onions, squash, jicama, and tofu. Goldilocks’ lumpia appears to be a typical example of Manila flavors and textures, balancing the contrasts of sweet and savory, garlicky and nutty, soft, chewy, and crunchy all at once. It was as interesting as it was filling. Try it as an afternoon snack, or make a lunch of it here with an order of Goldilocks’ bistek tagalog, rice, and sago’t gulaman.

Alternatively: Kanin Club (Ayala Triangle, map) offers lumpiang sariwa that looks pretty similar to the Goldilocks version, with the addition of coriander as garnishing. If you’re doing some hard-core touring in the older sections of Manila, stop by Globe Lumpia House, a hole-in-the-wall at 740 Soler St. (also known as G. Puyat St.) in Sta. Cruz (Santa Cruz), Manila City (map). The place is a one-off relic from the 1950s, and many Manila locals swear that this is still the go-to place for real lumpiang sariwa. It serves just three things: lumpiang sariwa, empanadas, and Sarsi (“sar-see,” a sarsaparilla-flavored soft drink similar to root beer.)

If you want to try lumpiang ubod, Via Mare Café & Oyster Bar (Power Plant Mall, Rockwell Drive corner Estrella St., Makati City, map) serves the humble lumpiang ubod for Php 110 with soft, quality ubod inside, with the sauce and peanuts on the side. On a budget? Go for the two-for-one offer at The Chocolate Kiss (Bahay ng Alumni, R. Magsaysay St., UP Diliman Campus, map): Its Php 105 serving of lumpiang ubod comes as two rolls packed with mostly real ubod (and its selection of cakes is not to be missed, so order a slice or two while you’re there!).