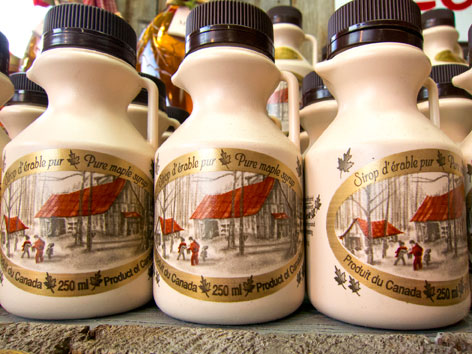 What: Québec is the world’s largest producer of maple syrup, or sirop d’érable, as it’s known here, contributing about 75% of all maple syrup on the planet. This is not, of course, the same kind of syrup that comes out of mass-produced “breakfast syrup” bottles (which, truth be told, are more accurately called “corn syrup”); this is the real deal, the sugary sap that gets tapped out of maple trees and boiled down and filtered into a beautifully pure, 100%-additive-free syrup. It’s been consumed on this continent since indigenous days, and it’s delicious, ranging (depending on its grade) from light and sweet to rich and caramelized.

Maple syrup and its many derivatives—maple candy, maple beer, maple cookies, you name it—are everywhere in Montréal, whether you visit during the province’s “sugaring off” season (late February through April, generally) or not. Here’s where to find the sweet stuff.

Good to know: Impress a market vendor by familiarizing yourself with the basic grading systems of Canadian maple syrup, which have changed (along with the U.S.’s) in recent years. These are all based on how much light can be transmitted through the thin-to-thick syrups. What was once called Extra Light is now Grade A Golden (light, delicate taste); that’s followed by Grade A Amber (richer taste), Grade A Dark (robust taste), and Grade A Very Dark (intense; mostly used for cooking and/or industrial purposes). (Québec’s provincial system uses two grades.) Amber is probably the best bet if you intend to pour your syrup on pancakes—not too light, not too sweet, not too caramelly—although some people prefer the thicker, sappier Dark variety. Always check the label, too, to make sure you’re buying pure maple syrup—even in Québec, you can find cheap imposters that add in corn syrup and the like.

Where: Our bottled maple syrup—a no-brainer of a souvenir in this city—is from Le Marché des Saveurs du Québéc (280, Place du marché du nord, map), a wonderful store just outside Marché Jean-Talon that specializes in all things produced within the province.

Order: This small bottle (250 ml) of pure Québécois “Canada No. 1 Medium” (the equivalent of Grade A Amber in the new system) maple syrup goes for $8. You will likely want to buy other things here, whether it be tarte au sucre and local craft beer or some Québécois ice cider from the liquor shop adjacent.

Alternatively: Some winning dishes around town shine the spotlight on local maple syrup (see the Plogue à Champlain dish from Au Pied de Cochon we feature in our foie gras entry), but for scoring bottles of the goods, try the vendors at local markets (look for the rows of cans at Marché Jean-Talon) or, in Old Montréal, visit the Délices Érable & CIE store (84, rue St-Paul Est, map), which sells maple everything (cookies, gelato, salt), including syrup.

If, however, you are in town during maple syrup season, you should try your best to day-trip to a country cabane à sucre, or sugar shack, which is where the trees are grown and tapped when the weather is right. These spots are at the heart of maple syrup production in Québec, and it’s not just about the syrup either—many have rustic, family-style dining rooms that serve up a parade of traditional Québécois dishes, like pea soup, fèves au lard, thick-cut bacon, and pouding chômeur, alongside endless beer and maple whisky. They’re no joke.

The New York Times likes Sucrerie de la Montagne (300, Chemin St-Georges, Rigaud, map), about 45 minutes from Montréal—notably, it offers overnight accommodation and is open year-round. About the same distance from town is Au Pied de Cochon’s own celebrated (and seasonally open) Cabane à Sucre (11382, rang de la Fresnière, St-Benoît, map), though it’s very popular and notoriously hard to get into. There are literally hundreds of these shacks around the province; check out listings by region here.