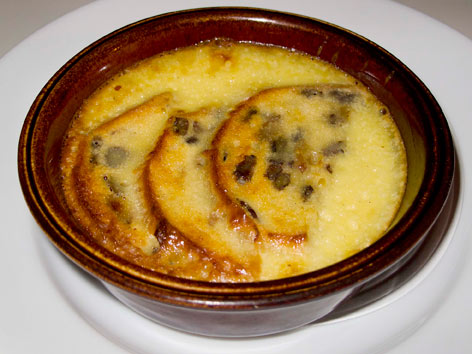 Among our favorite English puddings (OK, it’s actually tied with sticky toffee pudding), bread and butter pudding is like a richer version of bread pudding. It's traditionally made with white bread, butter, eggs, milk, sugar, and raisins or currants; vanilla, cream, and cinnamon often join the party too (as do fancier breads, like brioche or croissant). It’s likely been made here for centuries, beginning as bread pudding—another example of thrifty cooks recycling leftover food (stale bread) into brand-new deliciousness—and graduating to bread and butter pudding once ingredients like eggs and milk became more readily available. Nowadays you’ll see countless versions of this treat, with varying levels of breadiness, but it’s always delicious, with a taste somewhat like French toast.

Good to know: Puddings are their own class of food in this country: Unlike the creamy dairy-based dessert it’s associated with in the U.S., a pudding here can be sweet or savory, and the word has come to informally mean “dessert” on most menus (and there will always be many options).

Order: Close out a meal of good traditional British food here (other tasty things on offer might include kedgeree and cottage pie) with the custardy, raisin-dotted bread and butter pudding (£6.50), when it's available here. It’s plenty delicious on its own, but the real oohing and aahing comes courtesy of the accompanying side: a mug of warm crème Anglaise, a sweet, vanilla-rich custard sauce that we could drink forever. It’s all very rich and wonderful.

Alternatively: Look for it at gastropubs and traditional English restaurants, or hit up a local bakery. We liked the breadier version we tried from Sweet Boulangerie & Patisserie (64 Exmouth Market, map), in Clerkenwell, which also has a stall at Borough Market—you just need to heat it up for 25 seconds in a microwave.