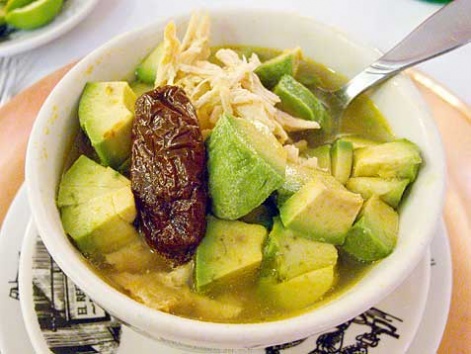 What: This spicy soup is among the most indigenous of foods in Mexico City, as it’s from a village—now D.F. suburb—called Tlalpan (map), just to the south. And unlike the weirder native foods from the region, caldo Tlalpeño is as simple and delicious as they come—chicken, chipotles (i.e., smoked jalapeños), avocado, and cilantro in a spicy clear broth. It’s the kind of chicken soup you wouldn’t mind catching a cold for.

Where: Of the regional offerings at the semiformal Fonda el Refugio (Liverpool 166, map) in the Zona Rosa, this soup is the most local.

Order: The caldo Tlalpeño (60p) makes a salty, spicy, flavor-bursting starter here—filled to the brim with shredded white-meat chicken, rice, and chunks of avocado, and topped with a big ol’ roasted chipotle pepper. The clear broth already has a good bit of spice to it, but cutting that baby open takes it to a whole new level. Squeeze a bit of lime on it to brighten things up, and wash it all down with a small but strong margarita (55p). Speaking of those “weird” native foods, we also liked the escamoles (250p) here.