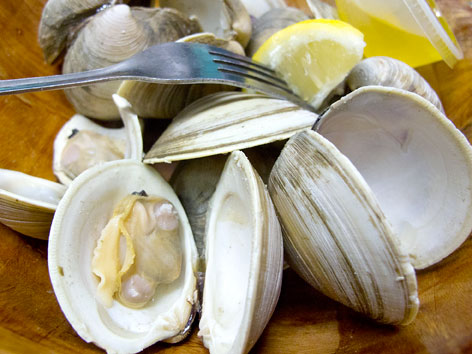 What: Regionally sourced clams, oysters, Gulf shrimp, and more from the waters around Florida. To find this in its purest state, hit up one of South Florida’s old-school seafood joints, where you can still eat like a king for pauper’s prices amid buckets of divey charm.

Where: One of our favorite restaurants in southeast Florida, Tarks of Dania Beach (1317 S. Federal Hwy, map) has been serving up delicious, mostly local seafood in clam-shack surrounds since 1966. It’s the kind of place you love instantly for its simple, timeless environment, where you belly up to the counter, glance at the happy diners around you and the nimble chef opposite, and instantly recognize you’re in for a treat. Plus you gotta love its motto: “Eat Clams…Live Longer! Eat Oysters…Love Longer!”

Order: Since this entry is titled “local shellfish,” start with the fresh steamers, unadorned but for lemon (topnecks or littlenecks; both $9.50/dozen; pictured), and a plate of deep-fried clam bellies (10 for $9.50, with fries)—all of Tarks’ clams (excluding clam strips) come from the Sebastian Inlet two hours up the coast. Order another beer and prepare for round two: a bowl of peel-and-eat Gulf shrimp steamed with Old Bay ($9.50) or the insanely flavorful Buffalo shrimp ($8.95), lightly breaded and soaked in hot sauce, with blue cheese and celery on the side. (While you’re at it, Tarks is rightfully celebrated for its chicken wings, so you should probably try those too.) You’ll also find great local fish—we recommend the mahi-mahi—and marinated gator tail here.

Good to know: During our visit, Tarks’ oysters came from Texas, but the source varies. It’s worth asking and then sampling from the raw bar. If you’re feeling adventurous, try a beer-and-hot-sauce oyster shooter!