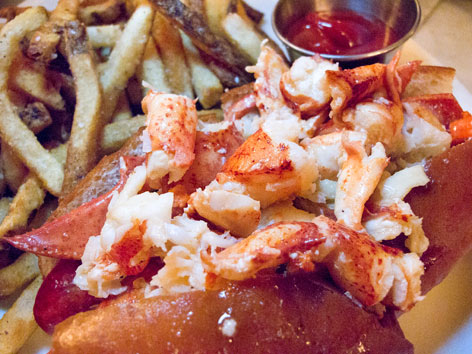 What: Lobster rolls aren’t just the food of Maine; they’re the food of coastal New England, and Boston is no exception. There are two distinct types of lobster roll—refreshingly cold and made with mayo (the Maine style), or decadently hot and made with butter (attributed to Connecticut)—and while Boston does not have its very own version, as the big cosmopolitan city between those two states, it offers delicious takes on both. Actually, scratch that. Boston does have its own version: It’s called a “lobstah roll” here.

When: Daily, 11:30am till the kitchen closes: 9:30pm on weekdays and around 10:30pm on weekends. The raw bar generally stays open an hour later than the kitchen. Expect a wait to get in.

Order: Admittedly, we are fools for hot lobster rolls, so we’re going to recommend that one here ($27). It’s ridiculously decadent, the generous hunks of Maine lobster lightly dressed with butter and served in a buttered brioche roll. In fact, the bread is so rich that we recommend you eat some of the lobster out of the bread so you can really taste that succulent meat. It’s served with fries, which were unfortunately oversalted during our visit. While you’re here, also sample some New England oysters, clam chowder, fried Ipswich clams, a crudo or two. You can’t go wrong with the fresh seafood.

Alternatively: Upscale clam shack B&G Oysters (550 Tremont St., map) likewise has a dedicated following among local lobstah-philes; there it’s lightly dressed with mayo, served in a basic hot dog bun, with fries—and will cost you $29. Much easier to swallow are the prices at James Hook & Co. (15-17 Northern Ave., map), owned by the same lobstering family since 1925; inside its little retail store on the waterfront, classic lobster rolls—bit of mayo and celery, hot dog bun—are sold for $13-$16, depending on size (don’t be dissuaded by the deli-like display cases, or the live lobsters in the tanks for that matter). Finally, if you want your lobster in saltier surrounds, try Kelly’s Roast Beef (multiple locations including 410 Revere Beach Blvd., map), across from the beach in Revere, on the North Shore (15 minutes north of Boston). Sure, it’s a regional mini-chain named for sliced meat, but we’re not alone in loving its simple, classic cold lobster roll ($18.75)—prepared like James Hook’s, with a little mayo and celery on a toasted, buttered roll.