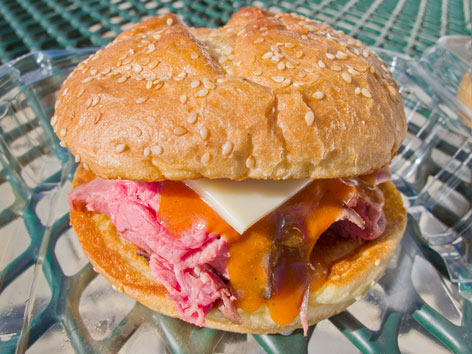 What: Boston—specifically the North Shore—has a thing for roast beef: Drive north of the city and you’ll see lots of signs for roast beef sandwiches. It’s not just any roast beef sandwich, of course—nothing like Buffalo’s beef on weck, NOLA’s roast beef po’boy, or L.A.’s French dip. For unexplained reasons, locals have scarfed down piles of pink, thinly sliced roast beef on grilled, round onion or sesame rolls, topped with “sauce” and a slice of American cheese, for decades here. It’s a tangy, dripping, beefy sandwich that makes a great red-meat alternative to the ubiquitous lobster roll.

Where: We liked the namesake sandwich at Kelly’s Roast Beef (multiple locations including the original, 410 Revere Beach Blvd., map)—which, incidentally, likes to claim it created the “Original Roast Beef Sandwich” in 1951. (In any case, the franchise certainly contributed to the sandwich’s popularity around here.) Locals will likely agree that Kelly’s flagship location in Revere, 15 minutes north of Boston, is superior to its other branches—especially given its salty setting, just across the street from the beach.

Order: Go for a regular roast beef sandwich ($7.25 for small; $8.25 for large)—order it with cheese and (tomato-y, vinegary) BBQ sauce for the true Boston experience (mayo and onions are other popular additions), and might we suggest the grilled sesame-seed roll? If you’re so inclined, we recommend upgrading to the surf-and-turf ($14.75): a smaller, quarter-pound roast beef sandwich served alongside a 4 oz lobster roll (which Kelly’s also does quite well, with just a little mayo and celery, and fries. It’s an unbeatable deal, with an ocean view to boot.

Alternatively: About a half hour north of Boston in North Andover, divey Harrison’s Roast Beef (80 Chickering Rd., map) is a local cult favorite, with a small menu focusing on the beef, what goes on top of it, and what goes on the side of it. More excellent pink beef and onion rings await at popular Nick’s Famous Roast Beef (139 Dodge St., map) in Beverly—similarly, about 30 minutes north of Boston, but on the North Shore.