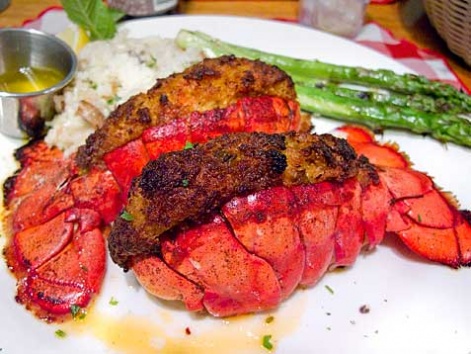 What: Nothing beats chowing down on fresh shellfish just yards from the boats that hauled it in, or the sea from which it came. Especially lobsters! NJ lobsters account for only a fraction of the state’s seafood and around 2% of the country’s catch, but it’s got ’em and they’re darn good. You will also find excellent crabs, clams, mussels, and (relatively local) oysters. Here are a few spots to try.

Where: Tucked next to the inlet that connects the Manasquan River with the Atlantic Ocean, seasonal Red’s Lobster Pot (57 Inlet Dr.) in Point Pleasant Beach is high on atmosphere—you can order from the counter outside, grab a table on the deck, and BYOB to go casual, or sip your own drinks as you wait for one of the 12 tables indoors—and locally obtained grub, where seafood and produce (when possible) are concerned. The owners, a local lobstering family, take pride in knowing the sources of their seafood, and it shows on their menu. You can generally count on the lobsters, scallops, clams, and oysters to be from NJ (and often from Point Pleasant-based boats), as well as any flounder, weakfish, monkfish, and bluefish that turn up.

When: Red’s is open March-October each year. Call to confirm hours during the off-season (closed Mon-Tues); between Memorial and Labor Day, it’s open daily, 12pm-9pm. Open for breakfast on the deck between Father’s and Labor Day: Mon-Sat, 8am-12:30pm; Sun, 7:30am-11:30am.

Order: Anything with lobster…or off their specials menu. This place is locally celebrated for its specials, which change twice daily and might include broiled twin NJ lobster tails stuffed with crabmeat, served with local grilled asparagus and an excellent almond-mushroom risotto (pictured; market price, but $32.95 during our visit). The lobster and shrimp ceviche and the lobster-corn fritters, occasional outside specials, are also fantastic, the latter filled with fresh corn kernels and lobster hunks then fried to golden-brown perfection. Indoors, the shrimp or lobster fra diavlo on the regular menu is a good bet; outdoors, try the fried sea scallops entrée or, of course, a beautiful 1.25- to two-pound broiled or steamed NJ lobster.

Good to know: Red’s doesn’t accept reservations nor allow more than five people to occupy a table indoors. Don’t forget your wine or beer! The restaurant can provide bottle openers and plastic cups (outdoors) for your vino—or make sangria with it ($10). For the best of both worlds, start with drinks and apps outside while you wait for your table (and entrées) indoors.

Alternatively: Check out the Crab Shack in Brick (732-477-1115; 74 Mantoloking Rd., map) for local steamed crabs by the dozen (see also: local fish). Another favorite of ours in this area is Park Seafood (901 Boardwalk at Aztec Ocean Resort and at Funtown Pier, map), with locations in Seaside Heights and Seaside Park—find it at the latter (Funtown Pier) in its more beachy-casual “clam bar” iteration.