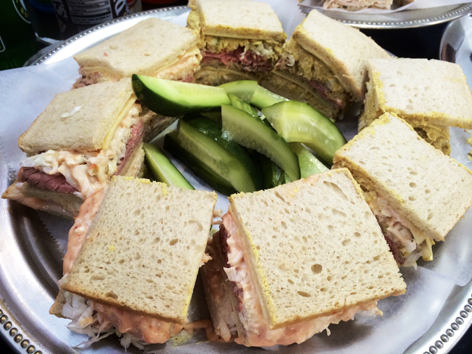 The New Jersey-invented sloppy Joe has nothing to do with the messy ground beef sandwiches of your elementary school’s cafeteria. It is a double-decker sandwich on excellent thin-sliced rye bread, with your choice of two deli meats (turkey and roast beef are popular), Swiss cheese, coleslaw, and homemade Russian dressing. It’s generally oversize and, yep, still messy. Perhaps not what you expect, but in a good way.

Its origin story may have roots in Havana, Cuba, of all places, but one thing’s for certain: Nowadays you’ll find this sloppy Joe in North Jersey only.

Where: In South Orange, the friendly, 1927-established Town Hall Delicatessen (74 1st St., map) says it was the first to make the sloppy Joe, back in the 1930s. As the story goes: After eating a delicious sandwich at a bar called Sloppy Joe’s in Havana, in the 1930s, the then mayor of nearby Maplewood returned to NJ and asked the deli’s owners to replicate the recipe (which, at the time, combined coleslaw, ham, cow tongue, Swiss cheese, and lots of dressing on thin rye bread). It’s not the only deli to lay claim to the sandwich’s introduction here, but it’s a great one to start with.

Order: Pictured is the Favorite Joe (half, $12.99; whole, $26.99), combining roast beef, turkey (roasted on-site), and Swiss cheese on thinly sliced seedless Pullman rye bread, but there are plenty of combinations possible here, from the Original Joe (with ham, tongue, and Swiss) to the meatless Smokin’ Joe, with egg salad, cream cheese, Nova salmon, and Swiss. About those sizes: Like New Orleans’ muffuletta, these sandwiches are hefty. They are meant for two to three people, but we ordered a whole for four adults and still had leftovers. Partially crustless and cut into quarters, these sloppy Joes evoke tea sandwiches, but they’re far from dainty. Picture afternoon tea with Paul Bunyan and you’ll be close.

Alternatively: Another beloved spot for this dish is just three and a half miles away in Millburn at the Millburn Deli (328 Millburn Ave., map), which has been around since 1947. There, the sloppy Joes range $10.95-$11.50 and are, we imagine, much smaller in size.