You don’t have to be an Olympian to burn off those sausage rolls: 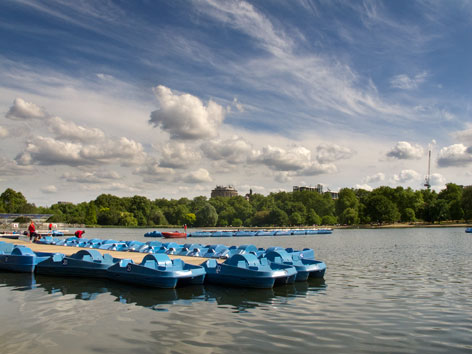 Walking London’s streets is, of course, the best way to get to know each of its diverse neighborhoods. Organized walking tours abound, such as the popular ones from London Walks, where the two-hour, £9 affairs have themes like Harry Potter, Shakespeare and Dickens, the Royal Wedding, and the 2012 Olympics (children under 15 are free if accompanied by parents). For some good noshing with your walk, book one of the tours by Walk. Eat. Talk. Eat. (£40), which pay special attention to East London’s traditional foods. Or check out Time Out London’s great DIY walks. One of our own favorite “urban hikes” is to start in East London, in the Exmouth Market/Clerkenwell area, and walk south to St. Paul’s, over the pedestrian-only Millennium Bridge to the Globe Theater and Tate Modern, and then west along the South Bank to Waterloo and the London Eye. There’s plenty of great eating and drinking spots along the way.

For a bit of nature, hit up one of the city’s fantastic parks. We love Hampstead Heath (map) for its relative overgrown vastness, hilltop meadows, and multitude of recreation options, including walking/biking trails, a recently resurfaced running track, and a pétanque pitch. Don’t miss the city views from Parliament Hill.

The eight Royal Parks provide countless recreational activities, from fishing and golf in huge Richmond Park to running in Regent’s Park, which is also home to the London Zoo. We particularly enjoyed pretty Hyde Park and its long Serpentine Lake; it’s one of the many Royal Parks that rents rowboats and pedal boats in the warm months, as well as comfy deck chairs for lounging.

Good to know: Hyde Park provided the setting for the Marathon Swimming and Triathlon events at the 2012 Olympics. 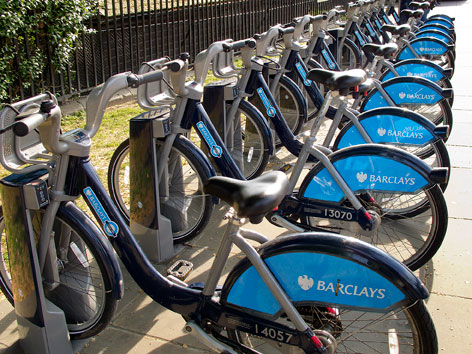 Bikers looking for a quick jaunt should take advantage of London’s expanding Barclays Cycle Hire program, launched in 2010 to provide cheap, easy access to bikes all around the city. Nonmembers can rent directly from a docking station—just look for the racks of blue Barclays bikes, called “Boris bikes” by locals after the mayor under whom the scheme launched—for a £2 access fee, plus varying charges depending on how long you keep the bike for (half-hour is free; one hour is £1, etc.), up to a maximum of 24 hours (or pay £10 for seven-day access). It’s perfect for a quick ride around a park, although if you plan on renting for longer than an hour or two, it may be more economical to go elsewhere. Note: We found during our last visit we couldn’t use the docking stations with our non-chip and pin credit card (an American-issued Visa).

Alternatively, check out Richmond Park’s Parkcycle center (rates vary by season; rentals up to four hours, map), ideal for exploring the hilly park’s various routes, such as the 12 km (7.4 mile) Tamsin Trail perimeter path; or the London Bicycle Tour Company (1a Gabriels Wharf, 56 Upper Ground, South Bank, map), which has all manner of bikes for hire (£3.50 per hour; £20 for the day) in addition to offering two-wheeled tours.