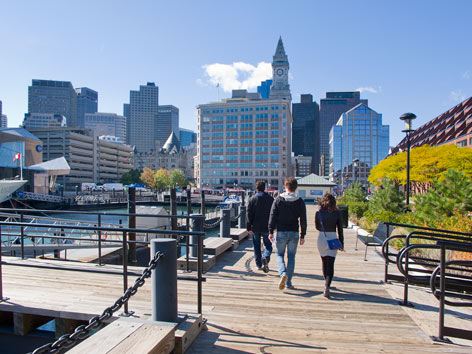 There are plenty of places in which to simultaneously walk, sightsee, and take in a salty breeze in Beantown. The Boston HarborWalk is a good place to start—it’s only 39 miles (intended to be 47, eventually) of free public access along one of the country’s most famous and historic harbors! Though the walk encompasses several distinct areas of the city, downtown is an obvious must: From the garden and Adirondack chairs of Lewis Wharf, head south around Commercial Wharf, past the greenery of Christopher Columbus Park and the 17th-century-built Long Wharf (now home to the Marriott Long Wharf), then continue around Central Wharf to the New England Aquarium (stopping into Legal Seafoods en route for a bowl of chowdah, if you like)—with any luck, you’ll be at the aquarium when a (free) harbor-seal feeding occurs. Keep walking south around India Wharf and its landmark metal sculptures (David von Schlegell’s “Untitled Landscape”), followed by Rowes Wharf, where you can view nearly 90 historic maps of the ever-changing Boston Harbor inside the lobby of the Boston Harbor Hotel. Then you might swing by James Hook & Co for a lobster roll, or cross over the Old Northern Avenue pedestrian bridge to check out the Institute of Contemporary Art and up-and-coming Fort Point Channel neighborhood. Want to learn more? Download a free audio guide before you go.

The Freedom Trail is another popular path for history buffs, or anyone wanting a good walk straight through the heart of Boston. From its start at the Boston Common—one of the country’s oldest parks—the 2.5-mile red-brick trail takes you through downtown, the Financial District, and the North End before culminating at the Bunker Hill Monument in Charlestown. You’ll pass by 16 significant historic sights, most notably the King’s Chapel Burying Ground, the Old State House, Faneuil Hall (where, at Durgin-Park, you might break for some authentic Indian pudding), and Paul Revere’s House. Various tours and audio guides are available for purchase.

Providing a way to join these two iconic walks together is the Rose Kennedy Greenway, a product of the $15 billion Big Dig megaproject that moved the city’s chief highway—the physically divisive Central Artery (I-93)—underground in order to decrease traffic congestion, increase mobility, and allow for more usable, attractive urban space. The Greenway is a mile-long ribbon of picnic-friendly* parks, gardens, and leafy promenades intended to connect the city’s diverse neighborhoods. For example, the North End parks intersect with the Freedom Trail just north of Faneuil Hall; from there you can follow the Greenway south to the Wharf District parks, which overlap with the HarborWalk detailed above. You might then continue south on the Greenway to stroll through the Fort Point Channel parks, Dewey Square Park, and finally, Chinatown Park. You’ll learn this city inside out before you know it!

*Bonus: Food trucks along the Greenway range from dosas and locavore hot dogs to Italian-sausage sandwiches. 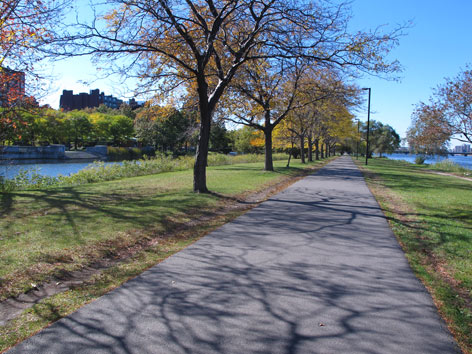 While you can certainly ride a bike along the HarborWalk—certain stretches are better than others—we prefer the other end of town for waterfront biking. The Charles River Reservation is a park that stretches for 20 miles along both sides of the Charles River, extending west and south from Boston’s North Station along the Charles River Basin and Upper Charles River. Within the reservation is the Dr. Paul Dudley White Bike Path (a.k.a. the Charles River Bike Path), providing the perfect 17-mile loop around the basin. Begin riding west on the river’s south side from Science Park (at the Monsignor O’Brien Hwy bridge connecting Boston and Cambridge), along the three-mile Esplanade and past Boston University all the way to Watertown Square, where you’ll cross the river (Galen St.) and turn back east, hugging the river through Watertown and Cambridge (and past the campuses of Harvard and MIT).

The Charles River is also paddler-friendly. Between May and October, the Charles River Canoe and Kayak Center (multiple locations including 1071 Soldier's Field Rd., in Boston’s Allston-Brighton neighborhood, map) rents out kayaks, stand-up paddleboards, canoes, and rowboats, starting at $15 per hour. Five-mile one-way trips are possible between rental centers in Boston and Cambridge, as well as various guided excursions. Barbecue kayak tour, anyone?